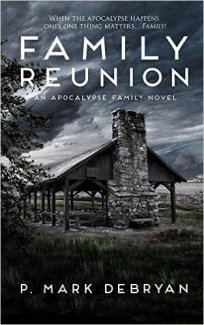 Okay, so he’s not really a zombie, but he did get cast as a zombie for a yet-to-be-released film. He’s also a new writer, whose first book is one all readers of zombie fiction will enjoy. Even those who don’t read zombie fiction might enjoy this story, as it is about more than flesh-eating creatures. Read on to meet P. Mark DeBryan and to learn more about Family Reunion.

First of all, thanks for taking time from your busy schedule to answer my questions.
You are quite welcome, Sara.

Please tell a little about your book, Family Reunion.
Well, the book began its life as a short story. It was created for John O’Brien and published in his book Untold Stories, which was a companion book to his series A NEW WORLD. He then allowed me to extend the story to a full length novel. It begins with our main character, Ryan, stuck on a ferry boat in the Puget Sound when the zombie apocalypse starts. In all honesty, they are not zombies, as they aren’t undead, but they prey on the living as a food source so they get lumped into the zombie genre. The book follows the entire Brant family as they are headed to a long overdue family reunion. Each group is coming from a different location in the USA and their goal is to survive and see if they can’t locate the others in the family. Some are driving, some are flying, and one is even in a luxury motor-coach.

How did you get into writing? Who are your inspirations?
As stated above, it was a contest of sorts; John O’Brien asked his fans to write short story based in his world. As far as inspirations? I would have to say Stephen King introduced me to the post-apocalypse genre, but John O was the one that got me going.

How is Family Reunion different than other zombie stories?
It is about family and the strength the characters get from each other to go on. The hope of reuniting and the different ways the crisis affects each member of the family. They are not trained soldiers, and most are just average people facing a completely devastating situation.

Can you give your readers a little glimpse into what Ryan and his gang of survivors will face in the next book?
Hmm … that would be cheating, but just between you and me, Sara? Ryan sets out with Maddie and Harry and a few others to go look for the ones they left behind at home. They travel in the Marathon Coach, which is a luxury RV with many prepper amenities. The story will follow them and also keep the reader abreast of what is happening back on Whidbey Island and those that stayed on there to begin clearing the place for use as a new freak-free sanctuary. Look for some major twists right off the bat; it should get interesting very quickly.

I know your family has been very supportive of your writing. I also know many of the characters are based on real-life family members. What do they think of being used as zombie-story material?
Some are mad at me for killing them off in the first story, more are mad that I killed their wives, daughters, husbands and such. Minor spoiler coming … my best friend in real life was the first to die. I did it in self- defense. I mean, who in the family can complain when I took out my best friend first, right? When I say they are mad at me, it is an exaggeration. They all are thrilled to be immortalized in the story, or so I tell myself.

Have you ever been a zombie?
As a matter of fact, yes. I just got home from the set of a new movie called My Uncle John is a Zombie. It was written and co-directed by John Russo, who co-wrote the original The Night of the Living Dead. I am a zombie in the movie, and it was a blast to be involved in the film. Several actors from the original movie are also in this one, with many new faces too. Gary Lee Vincent, who plays Oscar in the movie has become a close friend and was instrumental in getting me cast as an extra. My wife, Jonie, is in it also. We had so much fun that we may decide to run off to Hollywood together soon.

The movie is a Zom-Comedy, where John Russo’s character from The Night of the Living Dead escapes alive—or I should say not killed again from the sheriff’s wrath in the original—and is rescued by his niece and hid in her basement. She protects him and teaches him to be more selective in who he eats and the whole movie goes insane when he becomes a modern day celebrity.

I am seen wandering while chewing on an unidentified bit of intestine, and then again when I attack another character and end his career. (I will include a picture of me as the “Dude Zombie” for your pleasure.) If you would like to help the movie get distributed, you can help by donating at http://www.MyUncleJohnisaZombie.com, as it is an independent film just like us independent authors.

In a real-life zombie apocalypse, how long do you think you’d survive? Do you have a plan?
I have a plan, but I need more slow people to join me, as that is my plan. I don’t really think I would last long, as I have been told I am a sweet guy, and what zombie could resist that?

If you could see one non-zombie TV series get thrown into a zompoc scenario, which would you choose and why?
Hmm, let me think. Oh, I know. Survivor! Could you imagine the hilarity that would ensue as the zombies chase the cute blond girl down the beach, or a horde shows up to the immunity challenge. Oh yeah, that would be good TV there. The tribe has spoken/groaned, it’s time for you to go!

List five things about yourself that your readers probably don’t know.
– I went to seminary for two years to become a Baptist Preacher.
– I had a crepe restaurant when I was seventeen called DeBo’s Place.
– My nickname throughout my Coast Guard career was Breezly.
– The Pirate Parrot was a friend of mine.
– I was an honorary member of Jeff Gordon’s pit crew at his last race in NASCAR … Don’t tell Jeff, somebody might get fired!